Today was the (quasi)final tattoo session for my Phreak Show character sleeve.

Here’s how things looked going into the session:

Still a lot of empty space

This project has taken precisely one year, 12 sessions, 36-ish hours in the chair, $#### (plus a trade of a mounted human skull fragment).

Out of the dozen sessions, this one, the background, was by far the worst. The needles pierced & chewed the entire length of my arm. The sheer amount of skin area made it rough. Pain. From wrist to shoulder. Front, back, sides. If my poor, fragile skin didn’t have ink yet, it got some.

You know that sliver of skin between your elbow bones? The one that twangs and hurts like mad when you bang it against a sadist object? The “funny bone” it’s called… Yeah. Not even close to funny. Like ridiculously not funny. When the artist was inking it, a nerve zinged all the way to my hand and made my pinkie & ring finger involuntarily twitch & jerk. This was weird. Painful & weird.

Another spot of excruciating pain: the underside of my arm, near my armpit. WOWZER. That amount of pain should be illegal. Prophetically, that’s where Niko the Prince of Torture is located. Haha, Nico. Ha. Ha. 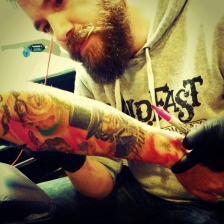 Joe laying in the background rhythm with a Sharpie. 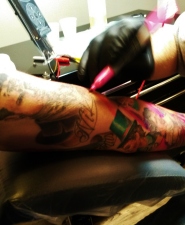 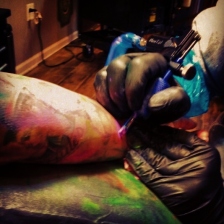 And some purple going in. 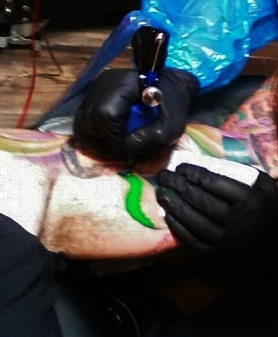 Partway through. The background will mimic the “aether” that powers the Phreak Show.

“Just rest your arm up and over like this.” 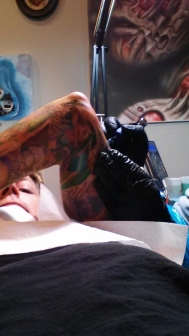 At one point, after 2 hours of suckfest pain, my whole body was shaking. I tried to stop it, but it was doing that thing like when you’re shivering from the cold and can’t stop. I’m pretty sure my body was protesting, as loudly as it knew how, for me to stop traumatizing it in such an evil manner.

Joe, my tat artist, ripped the needles through my skin. “You sick of me yet?”

He laughed. I cried. (Almost). I tried to ascend to my happy place & soldiered on. Like a trooper and whatnot. I’d come too far to quit partway through the final tattoo. Even though it hurt like infiinte hell. <—possible exaggeration. Eventually, Joe stopped hammering my tender, Irish flesh. I shook off the grog & stood on quaking legs to check out his handiwork.

One final-final session is scheduled for May just to make sure everything looks crisp & ~finished~ after a few months. Perfection, ya know? That last-pass edit of compulsive tweaking. But it’s close enough to call this the final draft.

Phreak Show is officially  a “manuscript” and not a “book” at this point. Still, being the hopeful chap that I am, I may have already imagined myself at a signing, modeling the sleeve, readers hunting down their favorites on my arm, agreeing with the image or explaining how they pictured the characters differently.

The concept, the characters, the finished story, a phenomenal agent for said story—even the sleeve itself—all started off as dreams. And those dreams, after much patience and owww-shit-owww pain, all came to pass.

And, optimistic, tatted writer-boy that I am, I know the day will come when I roll up my shirt sleeve with a smile to reveal the sleeve underneath.

“Oh yeah! I’d love to a pose for a pic with you, dear reader. But first, let’s put this temporary tat of Twiggy on you. Where do you want her?”