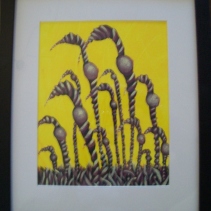 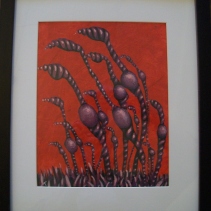 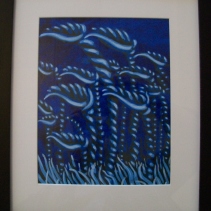 I’m venturing into new territory – offering a little insight into some of the hows & whys behind the art I create. I believe there’s a balance between sharing just enough vs too much. Ya know, like how sometimes it’s cool to just let the art speak for itself.

But I often get asked about technique & intent, so.

For my current show @ Blake Anthony Gallery, I played with color theory. This 12-piece series is my exploration with a limited palette & the way the color of a given atmosphere affects shadows & highlights.

I chose plant life for the subject matter. Mainly because I could experiment with a controlled expressionism (is that even possible?!) with bold, limited brushstrokes.

Conceptually, these are plants I completely made up. Sort of variations of similar species. The series title, Flora of Gondwana, speaks to the narrative behind the whole set.

There’s this theory that, over the long arc of geological time, Earth’s landmasses go through repeating periods of convergence & separation. All the land is at times gathered in supercontinents. The land later divides into separate continents.

As supercontinents drift apart, due to the new oceans stretching between the continents, plants & animals on these separated continents diversify. They change. Different populations of the same species develop in new ways based on new environmental conditions.

I kinda dig how they almost look like prints, yet each is a hand-painted original.