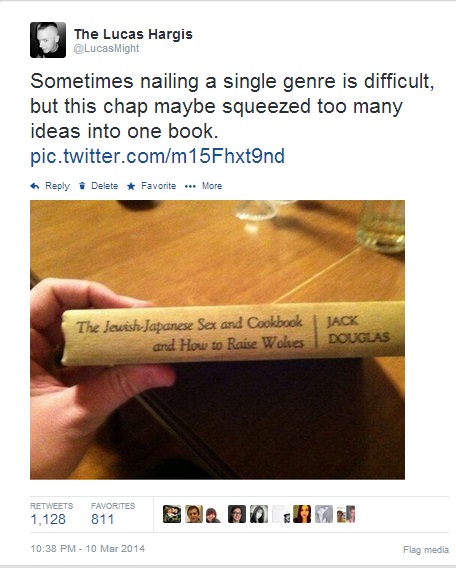 Like, a streetlight blinks out right as you pass under it. Or a portal opens in the overcast sky so a single, slanted ray of sunlight sneaks through in glorious perfection. These are things we cringe or smile over.

A random occurrence on Twitter had me both cringing & smiling this week. Also, head-scratching.

See that Tweet up ^there^? I posted it on Monday 3/10/14 at 10:38 pm EST. It received a few RTs that night, which ballooned the next day. And the next. It got up into the hundreds—I’m thinking around 300 or so RTs. And that was a complete aberration for me. My highest number of RTs before that was around 75 for a coffee-related Tweet shared in the morning. [Because coffee!] My How I Got My Agent link also received a massive amount of play. [Because writers!]

Everything quieted down with the Undying Tweet. I [mostly] forgot about the aberration and moved on. As one does. But it sparked some lingering questions in my mind:
– What made that one so popular?
– How can I repeat that?
– Is there a formula here, or at least attributes I can glean, to help craft RT-able Tweets in the future?

I’d already been reading quite a few articles on social media marketing. Stuff like the best days & times of the day to Tweet/blog/FB/Tumbl, the types of information that get the most interaction, etc. There’s an abundance of data and research findings. Here’s one such example: Best Time to Tweet

Before the Undying Tweet was born, I’d been intentionally playing with timing and content, tossing out test subjects—funny, serious, links, images—at different times of the day. I wasn’t super-scientific about it, but just intentionally varied the types of content and posting times. During this process, I stayed decidedly me, Lucas, but chose to tailor my content a bit for the test subject Tweets.

My non-scientific findings:
– Folks seem to like short, funny things in the morning.
– Image Tweets in the morning do especially well, but are golden anytime.
– Helpful links get good play in the daytime.
– In the evenings…beats me! I revert back to sharing whatever randomness pops in my mind or I stumble across. #QUASI-SCIENCE!

I found that image on Tumblr. I switched venues and added my own insight. The author of that book, Jack Douglas, obviously titled it like a boss back in 1972. That made the image intriguing. Maybe my commentary had nothing to do with the success of the Tweet, but I’m going to pretend like maybe it did.

And, apparently, magickal streams of energy aligned and {{poof}} it grew wings, flapped around for a while, and eventually nested. Then, 3 weeks later, for some unknowable reason, someone, somewhere resurrected it. It bounced over to some guy with 50k followers who ended up RTing. Then others with 5-digits of followers. And it hit 500 Favs, so Favstar RTed it. The chain reaction just kept spiraling outward and it went quasi-viral.

The Undying Tweet hit 1ooo RTs yesterday afternoon, then nested again. I woke up to an influx of 100 more RTs this morning as folks on the other side of world picked it up and continued the signal boost. Again.

You better believe I’ve deciphered the hell out of the wording, the structure, the timing…

Based on some Twitter comments and questions, I get the feeling many of you have been doing the same. Because we all know that an occasional viral Tweet, when it could really help promote a book, for instance, would not be a bad thing at all.

In my ridiculously limited wisdom, here’s How To Create A Tweet That Won’t Die:
– Be intentional about varying your content & timing.
– Share stuff that interests you. Chances are, it will interest others.
– Keep the topics broad at times: food, books, movies, kitties (blergggh) for the most RTability.
– Add your own flare. What good is a signal boost if your brand isn’t lightly stamped on it?
– Use images.
– Believe in luck, magick, serendipity.
– Don’t stress over it, but like any other goal, continually experiment & hone that skill.

This has become an experiment at this point. The Undying tweet is currently at 1136 RTs and 816 Favs.

If you’d like to add to the magick, RT or Fav the infamous Undying Tweet by clicking here.

And I’m curious…
What patterns have you noticed?
What are the characteristics of your most Retweeted or Faved Tweet?
Do you believe Tweeting is a craft worthy of honing?

I’d love for you to share in the comments so we can keep deciphering the magick [as much as magick wants to reveal of itself anyway] together.