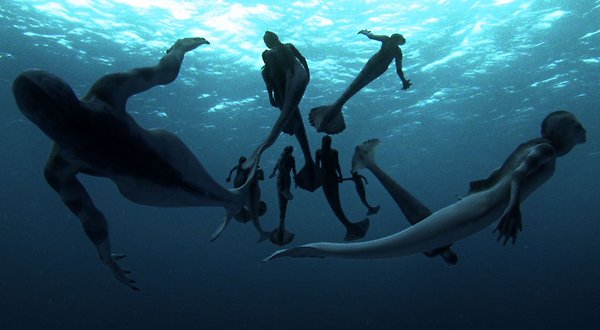 Some friends and I spent part of our Memorial Day Weekend learning about Mermaids. Well, let me clarify. We didn’t dive into the Mariana Trench armed with sonar, harpoons, nets, and DNA-mapping equipment. (Although, that would have been insanely cool!) We watched a pair of sci-fi shows on Animal Planet:  Mermaids: The Body Found and The New Evidence.

The shows were pitched as “real” and “true story” and all that. But shows like this, which detail proof of Atlantis, Bigfoot, or extraterrestrial life, are always more entertainment and conjecture than science. The Mermaids shows were no exceptions. The “evidence” and videos regarding mermaids were obviously fake. The ‘candid’ experts were obviously scripted. Underneath it all, three things still shone through as redeeming:

Throughout the shows, a lot of “Bullshit! That’s so fake!” and “Really? Look at that! So.stupid.” echoed through the loft. Still, I found the programs both interesting and entertaining. Also, I drew parallels the whole time of how one part truth—braided with two parts imagination—can create an engaging, appealing story. If handled properly, one kernel of plausible truth can spark the suspension of disbelief, and allow us bi-pedal humans to dream of other worlds and other creatures, which are very much like ourselves. No matter the setting or characters, all great stories show humans either as we are, or as we could be.

There is an Encore Presentation Wednesday May 29th at 8:00 PM Eastern. My friends might disagree with me, but I highly recommend it. Simply watch the shows with the understanding that they are 1 part Science, and 2 parts Science Fiction.

For the record, I want to believe in Mermaids.